Battle Arena Toshinden (闘神伝) is a weapons-based fighting game developed by Tamsoft and published by Takara and Sony Computer Entertainment in 1995-1996 for the PlayStation, Sega Saturn, Game Boy, and PC. It was one of the first fighting games to boast polygonal characters in a 3D environment, and it is credited for taking the genre into "true 3-D" due to its introduction of the sidestep maneuver.

The game was originally promoted as a PlayStation exclusive, with Sony initially promoting it as a "Saturn killer" (against Sega's Virtua Fighter), but it was ported to the Saturn with additional features less than a year later. Once fighting games like Tekken started emerging, Battle Arena Toshinden quickly declined in popularity, but still did spawn a series of sequels. It was the first 3D weapons fighter, and was succeeded in spirit by Soul Edge and other games of the genre.

Each character has his or her own unique set of basic moves, special attacks, and a desperation attack that can only be used when the player has low energy (around 10% or less). The player is able to move in 3D around the 3D arenas using the L/R shoulder buttons, which can be used to dodge projectile attacks, or get away from a dangerous spot.

Players move using the directional pad. Holding the backwards directional button allows the player to block basic attacks and reduces most of the damage from opponents' special moves. Players can also run by quickly tapping the forward directional button.

A young Japanese swordsman/adventurer named Eiji Shinjo, who has spent the past few years searching for his long-lost older brother, Sho, enters the legendary Battle Arena Toshinden tournament hosted by a mysterious organization known only as the Secret Society, along with seven other traveling fighters, the fighters themselves being Eiji's best friend/rival, Kayin Amoh, a Scottish bounty hunter who seeks revenge against the previous tournament champion of last year for the death of his foster father; Sofia, an amnesiac Russian private detective who is seeking her long-lost past memories; Rungo Iron, an American miner who is determined to rescue his kidnapped family from the Secret Society; Fo Fai, a Chinese magician/serial killer who enters the tournament in order to satisfy his personal bloodlust; Mondo, a Japanese ninja who is undertaking an infiltration mission for a rival group of the Secret Society; Duke B. Rambert, a French knight seeking revenge against Eiji for a past defeat; and Ellis, a cheerful and kind-hearted orphaned dancer who is seeking personal answers regarding her long-lost missing father.

Eiji progresses through the tournament and ultimately comes face-to-face with the tournament's sponsor, the mysterious Gaia and even though Eiji manages to hold his own against Gaia from within their final battle against each other, the tournament is unexpectedly halted when it is soon discovered that Gaia is holding the competition without the Secret Society's permission, with the intention of acquiring fighters in order to help him overthrow the organization as a part of his personal vendetta against them. Gaia is forced to flee into hiding while leaving Eiji no closer to finding his long-lost older brother.

The game was ported by Nextech/Sega to the Sega Saturn as Toh Shin Den S in Japan and as Battle Arena Toshinden Remix in the United States and Europe. A few new features were added, including an exclusive new character named Cupido and a story mode which enables the player to learn a few details about the characters' story backgrounds and the reasons of why they had entered into the tournament. Work on the Saturn port began while the PlayStation original was still in development.

Developed by Digital Dialect, the DOS port added an exclusive new character, Earthworm Jim, complete with his own unique arena music, but he only uses the moves of Rungo Iron. It also supports resolutions up to 640x480. The PC port uses the Japanese PlayStation version's voices and music in all regions, unlike the original PlayStation version.

A Game Boy version was released by Takara in 1996, titled Nettou Toshinden in Japan. The game is based mostly on the original PlayStation version, but  is a 2D versus fighting game, instead of 3D, drawn in chibi graphics. It includes a slightly altered story mode and an early appearance of the character Uranus and the Battle Arena Toshinden 2 version of Gaia (without his armor).

A game named Toshinden (闘真伝) was released in 2009 for the Nintendo Wii and has no connection to the previous games' storyline. 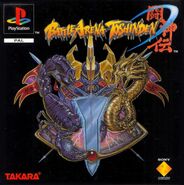 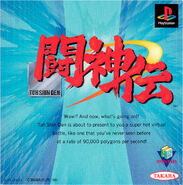 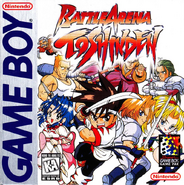 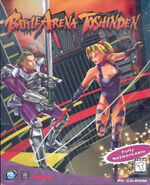