Cupido is an elite member of the Himitsu Kessha who had secretly participated in the first Toshinden tournament for reasons unknown, although she seems to have an interest in saving Uranus, and warns of a dark future involving her. She is highly aware of many characters' pasts and personal affairs and offers them cryptic advice upon defeat. She is later revealed to be the young sister of Ripper: a playable character in the Sega Saturn version of the second game, Battle Arena Toshinden URA. She is also known to have had a relationship with Sho Shinjo and is Subaru's mother.

Cupido's whereabouts after the events of the first Toshinden game is never given any explanation, but it is heavily implied that she may have died after the fall of the Himitsu Kessha, due to the fact that Sho had left Subaru in Eiji's care after the events of Battle Arena Toshinden 3 and that Sho himself had told his young brother that he was the only family that Subaru had left. 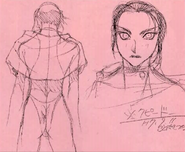 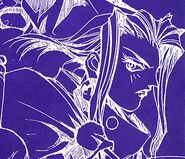 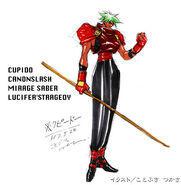 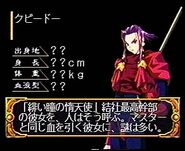