Duke B. Rambert is character in the first three installments of the Battle Arena Toshinden series. He is a French Nobleman, and a champion knight of his King's Castle in France.

In the past, Duke was considered the strongest knight in France and a nobleman many people say was unstoppable, but all of that had changed one day when a young Japanese world-travelling adventurer named Eiji Shinjo was challenged to a duel by him. Eiji had easily bested the arrogant Frenchman, and Duke vowed revenge.

For a while, Duke forgot about Eiji, and went on with his own life, eventually finding a girlfriend, but Duke turned back to fighting when he entered the Toshindaibukai tournament hosted by the Himitsu Kessha. To his horror, he came face to face with Eiji for a second time, and once again he lost pathetically, intensifying his personal hatred toward the Japanese adventurer. Ashamed, Duke decided to retire from fighting.

However, Duke had entered the second Toshindaibukai after hearing and learning that his girlfriend had betrayed him and become the new Uranus of the Himitsu Kessha. Driven by personal vengeance, Duke entered the tournament, and this time, found himself fighting alongside with Eiji to find Uranus, but when Duke heard and learned that Uranus had already been slain by Eiji's older brother Sho, Duke had abandoned the battlefield, with an emotional part of him mourning the loss of Uranus, as even though Duke was still bitter by her shocking and unexpected betrayal towards him, he had personally wanted to redeem and save Uranus via his own lingering and personal feelings towards her.

When the third Toshindaibukai was announced, Duke entered solely to not only fight Eiji once again, but to also help himself and his fellow Toshinden fighters out, due to the fact that he was targeted by old enemies of his family, the Soshiki, to be a blood sacrifice for the fallen fighting god, Agon Teos. During the tournament, Duke was stopped by a rival knight named Balga, who had a score to settle with him. Balga had descended from a lineage of Norse invaders who soon became the knights of Normandy since their arrival on France's shores, and his family were known to be sworn enemies of the Rambert clan since the days of Francia and the Viking Age, having been thwarted time and time again by them, and retreated to Norway since the assimilation of Normandy into France's sovereignty. However, Duke managed to slay Balga in combat.

After hearing that Eiji had slain the leader of the Soshiki, Abel from within their own fight, Duke had retired from fighting for good, and settled down as a rich nobleman in France. Duke had also took in and trained an English boy named Lancelot Lakeknight as his apprentice for the fourth Toshindabukai.

The evil Organization crumbled before Duke's mighty swordsmanship, and failed miserably in its attempt to destroy the Rambert family.

Entrusted with the duty of protecting the honor of his family, Duke had to fight the onslaught of darkness with his own hand, no matter the opponent...

The battle over, Duke feels his duties as lord anew, and vows to protect the peace of his lands forever.

Duke's main weapon is the two-handed knight sword named Dernier Ventcour which he shared from his rival Balga. One of his moves can be heavy damaging as opposed to Gaia's own sword. Altogether, his moves are mostly crosses when he utilizes his special attacks, his overdrive and his desperation move.

Duke speaks somewhat normal but elegant in Japanese. But in the English version, he speaks like a rich nobleman which would later parallel to his current occupation in Toshinden 4 to train his apprentice, Lancelot Lakeknight. 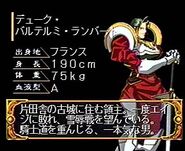