Mondo is a character in the first three installments of the Battle Arena Toshinden series. He is a ninja warrior spy from a feared yet revered Japanese warrior clan.

Mondo is the leader of the Yaki Clan, a secret clan of ninjas into the modern day who make their home hidden in the forbidden forests of Aoigahara at the base of Mount Fuji. Unrelenting and almost inhumane in their methods to hone their shinobi into their consideration of perfection, the Yaki continue on as elite spies and agents for hire if the price is right. Centuries ago, they were once the keepers of the Four Sacred Weapons, but mysteriously, all but the Seiryuu Spear was taken in a single night.

Mondo had entered the first Toshindaibukai in order to collect information about the Himitsu Kessha for his unknown client. Even though he was defeated during the tournament, he had gathered enough information on them.

Just as his client was about to attack the Himitsu Kessha, Mondo received an invitation to the second Battle Arena Toshinden. As a way to retaliate, his client tried to hold Mondo back, telling him to discard the invitation. Mondo ignored the restraint and headed for the tournament without the consent of his client. Although he lost, the Himitsu Kessha fell right after the conclusion of the second Toshindabukai.

Unknown to Mondo however, his headstrong decision to fight in the second Toshinden had been taken advantage of. As he made his way back to his home village, the village had been violently attacked by unforeseen invaders, and at the head of the raid was described as only a being like an oni of myth, with skin like steel and brutally killed many of the Yaki's warriors in a storm of fury. Realizing his betrayal by the Organization, another memento given to Mondo was the fact that he had been selected by Abel to be a blood sacrifice for Agon Teos: a dark fighting god. When he learned of this, Mondo steeled himself to make the Organization learn of the hell hath like a ninja who now fights for themselves and their own honor, and entered into the third tournament with Eiji Shinjo and the prior Toshinden champions.

While his campaign in the tournament had him ruthlessly plunder Organization strongholds for information for Nagisa Iwashiro to give to his superiors to legally take down the evil cult and offed many of their forces to weaken them, Mondo learned of a twist to the so called prophecy Abel kept secret even from his own fellow higher ups, and that the assailant who destroyed his village was the android Adam. Not wanting to make the mistake of acting off of blind emotion over his better intuitions, Mondo had sent the information to the rest of the fighters that they are to fight those who are of "their shadow", and for Mondo himself, he later confronted Toujin, one of the Soshiki's main assassins chosen to officially fight in the tournament, and killed him.

Ten years later after the fall of the Soshiki, Eiji Shinjo became the head of the Gerard Foundation and when he learned about the power of the 4 Sacred Arms, he decided to find Mondo, since he carried the spear of Seiryu. Mondo was also targeted by an evil Chinese magician named Genma, who also sought the power of the 4 Sacred Arms. During an unknown past battle, Mondo was gravely injured and could barely aid himself in his own predicament, but within time, Mondo would get some unexpected help in the form of a young fisherman named Fen Barefoot and his grandfather. During his recovery, Mondo had showed his gratitude towards Fen by teaching him a couple of his spear moves and techniques. After regaining his strength, Mondo would bid farewell to his two new friends and leave Fen and his grandfather in his own accord, not knowing that Genma was following his path in secrecy and that it would lead to the death of Fen's grandfather, which prompted Fen himself to enter into the fourth tournament so that he could attempt to defeat Genma and avenge his grandfather's death.

It is assumed that Eiji got to Mondo first, since Eos (one of Eiji's fighters) fought with his spear in the fourth Toshindabukai.

The descendant of a warrior family, the only time Mondo can express himself is in battle. His face a blank, he threw himself into combat, heeding nothing but the call of destiny. Victory in the Toshinden Battle Arena is sweeter to this fighting machine than success in any of his previous battles.﻿

Mondo staked the honor of his family and its very survival on this fight. Despite his skill and tremendous strength the battle was not easy.

He managed to defeat the Organization and scatter its followers, but the things he had lost could never be replaced.

Once again, Mondo must return to his life as a spy, wrapping himself in the cloak of darkness. Wherever trouble arises, he and his clan are sure to be close by, slipping silently in the shadows. 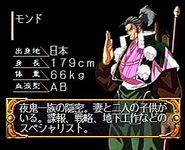